Once upon a time there was a young girl who abowe all wanted to have a dog....

The beginning of my story doesn´t sound much different from most dogpeoples first steps into the dogworld...
The year was 1981 when I again, one Sunday morning was reading the section “Dogs for sale” in our local paper. An ad for Bearded Collie pups caught my eye and I thought the name of the breed sounded fun. So, immediately I had to check in the dogbook what this creature looked like and as you can imagine, my interest just grew more....  As the feisty little girl I was, I phoned the breeder to ask about the pups and set up a date to go have a look at them. I was 8 years old

A few days later I hopped on the train and travelled the loooong way from Helsinki to Tuomarila (about 30 min.). At the door I was greeted by the pups mom, “Molly” and a few steps later by the whole litter. After this, I was convinced that I absolutely HAD to have one of theese, the worlds sweetest and happiest dogs ever. I visited the breeder several times more, alone... with friends... and finally also my mom agreed to have a peak. To this day I have to admire the patience of the breeder, who endured so well all the countless visits from an overenthusiastic kid. My parents weren´t let off any easier... this was the beginning of weeks of whining and convincing... I was almost sure that we wouldn´t have one of the pups, when my mom surprisingly gave in. I was the happiest girl in town when little Muffe (Aurora) came to live with us in December 1981, just before my 9th birthday. 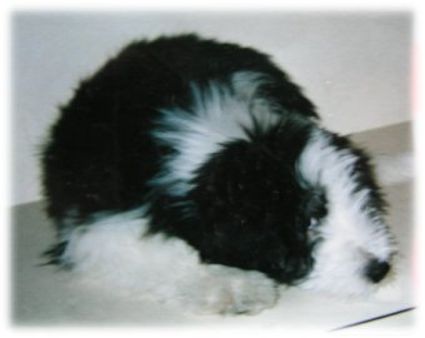 The beginning of our journey with Muffe went well, but quite soon it became obvious that we didn´t know so much about raising a dog. Muffe had quickly made herself number 2 in our household, directly after my father. Our dog had become a true “daddys girl“. This would ofcourse not have been a problem if my dad hadn´t at the time been working at sea and being gone for months at an end. Muffe didn´t see any problem in this as she was very content being #1 when my dad was at work. During those years we had many interesting situations which were solved by trial and error and they weren´t always very easy.
Still, looking back now, I´ve come to appreciate everything I learned from Muffe.
When I turned 15, I moved to live on my own for the first time. Muffe stayed with my dad and I didn´t have any pets. Pretty soon the home started feeling empty and I started thinking about having a dog of my own. I was considering many different breeds, but my thoughts always returned to the Bearded Collie. I knew that all of them weren´t as difficult as Muffe, it was just a matter of proper training. So when I was visiting the big annual all breed show in Helsinki, in 1988 and an ad about Beardie litter caught my eye, I grabbed the chance. Katri Jalavas bitch, “Manta” Misty Moonlight´s Allison had given birth to a litter 22.2 and there was still a few pups available. I went to have a look at them and when “Tossu”, Dupton Double Scotch, climbed onto my lap, it was the point of no return for me. In the spring of 1988 Tossu moved home to me and that´s a decision I´ve never had to regret.
We were unseparable with Tossu, we did everything you could imagine together. I could not have hoped for better teen-age years. Tossu is the one, who will always be “The Dog of my life”.
A boy who totally stole my heart..... 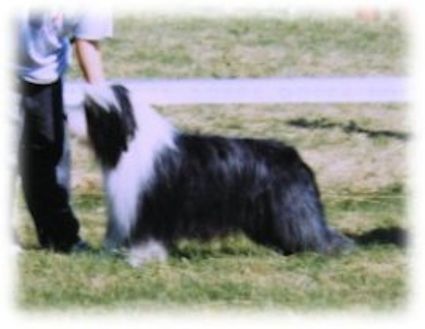 Little by little I started thinking about breeding... I found myself looking for interesting litters, where I could find a bitch for myself. At the time, I went to a lot of dogshows with Tossus breeder, Katri Jalava, and to her I owe a big Thank You for guiding me. In 1990 it was a stroke of luck for me, that Janet Lewis, from the world famous Potterdale kennel came to judge the Finnish National Specialty. She was at the time looking for a kennelmaid and it was decided that I would be working that summer at Potterdale. So that´s how I spent an unforgettable 1,5 months in England in the summer of 1990. My eyes were opened to countless new opportunities and I also got to bring home a little Beardiegirl of my own. She was to become my lovely foundationbitch, “Minni”, Potterdale Celebrity. 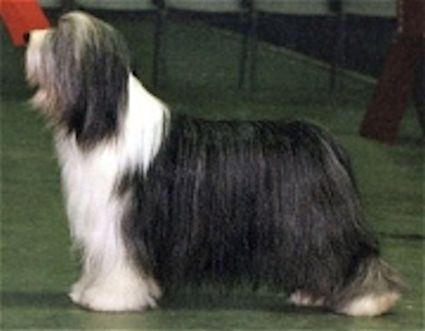 Originally I was supposed to return to Potterdale the following year after finishing my school. However, the import rules of England were very strict at the time and both my dogs would have had to spend ½ a year in quarantine. This complicated things so I couldn´t go. At the end of 1990 I had been aquainted with Bea Sawka of the equally world famous Classical kennels. A new thought entered my mind...
I figured that if I wanted to be a kennelmaid it didn´t really matter on which end of the planet I would do it... So I wrote to Bea and suggested that I´d come to work for them for a while and to my happy surprise, she agreed.
In the fall of 1991 me, Tossu & Minni travelled to Canada, to Bea & Kevin Sawka. We stayed there alltogether a little over a year and also a few months in California. During this time I grew as a person  mentally (and physically

) a lot, not to forget all the priceless knowledge I got about the Bearded Collie. I am Eternally Grateful to Bea & Kevin for the time I got to spend with them and I value them very much as my friends aswell as experts of our lovely breed.
And what would a trip be without souvenirs.....
My third Beardie, “Dixon”, Classical Stand Tall, accompanied us home in December 1992. Before our return, I had also mated Minni with the very famous Potterdale Double Image, “Burton”.
So, at the end of January 1993 the first litter of Memorylane Beardies was born.
And the rest, as they say, is history.... Still in the making though.... 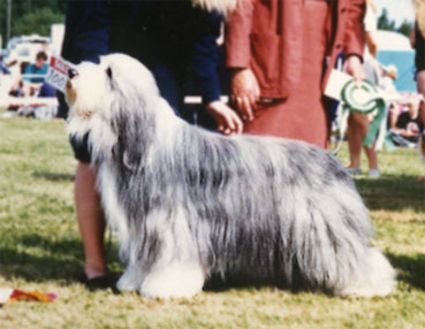 In my breeding-program I strive to use only first class Beardies, the kind that in my opinion have something positive to contribute to the breed. Showmerits are nice, but the most important thing is the dog beneath its hairs. Most dogs can aquire titles, given the right circumstances, so those don´t really tell us the entire truth. I also find it very inspiring to be able to occasionally find new dogs "off the sofa"  for my breeding, who are “diamonds in the rough” and are just waiting for someone to discover their potential.

I like to think I have developed a keen eye for comformation over the years and especially my favourite subject - Movement. I can accept several different breedtypes of Beardie, but the movement HAS to be on point. Light, effortlessly ground-covering, almost with a drop of panther-smoothness....
Not to be mistaken with someone just running fast as hell, which you unfortunately see way too often.
I also don´t mind a few "Beardie bounces" here and there, even with older dogs. A Beardie Should have that special extra spark all the way to the end. Nothing is more sad than a robot-Beardie. The odd bounce will definitely not make the assessment of movement impossible.
Not, if you KNOW what you are looking for 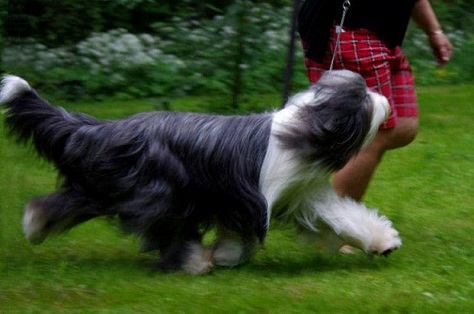 I also believe that a dog with this spark is often a good herder. They think quick and are able to make independent decisions. Combined with the smooth moves, they make up the working dog our standard asks for. This is a dog that also lasts in the long run.
I believe a Beardie should not be divided into show- and working-lines. I think the correct Beardie can do both, aswell as other hobbies too. The sky, and the time & skills of the owner, is the limit!

We certainly have many of those Beardies and not even coat has ever been an object.
Yes, coats are longer today. But as they are correct quality they do grow. None of our dogs are deprived of everyday walks in the rough & tough. We live in the countryside next to the forest. Dogs are brushed once a week and that´s it. Their QUALITY coat don´t need anything else.
I find it funny, but also annoying, that most people don´t believe that the routine really is this easy.
Our Beardies are not Lhasa Apsos or Afghans and not treated as such.
Bathing is done on a need-to basis. Show-bathing mostly whites only.

In our breeding-program Health & Temperament play a very important part too, it is like building a delicate puzzle to make the "perfect" combination. Many breeds are plagued with a LOT of diseases and obviously Beardies have some too, but we are still in a relatively good place. Preventative measures are being taken and especially here in Finland we have made extensive co-operation with genetic researchers for the good of the breed. Also ALL Finnish Beardies used for breeding are hip- & elbow-x-rayed aswell as eye-checked.
We will definitely continue to strive to make our dogs live a long and healthy life and our breed have a positive future to look forward to.

Breedingwork is always to make compromises, even though I prefer to keep them to a minimum. Only the best is good enough and the combinations that I make are carefully selected and thought out. I´m also prepared to travel as far as needed to get new valuable blood to my lines. During the years I have done a lot of international co-operation, I think this is essential to great breeding-work. I´ve also been priviledged to borrow some Top dogs through the years, both via European & Scandinavian co-operation, which I´m very grateful for.  In addition of interacting with lovely dogs, I have also gained many wonderful friends worldwide....
Thank You All for enriching my life ♥ 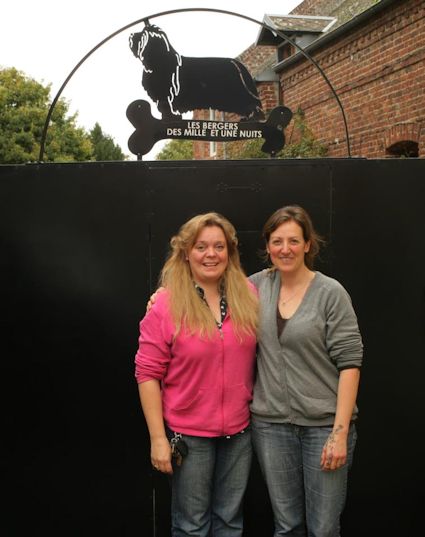 We have had our share of the show-success and it always ofcourse feels wonderful
to get recognition for all the hard and most importantly, Honest! work you do.
Still, our dogs are first and foremost our best friends and “sofa-champions”.
The everyday “look” after a run in the forest is far from the glamorous one in the showring. And for one reason or another, all can´t be show-stars, but that doesn´t mean that they don´t shine for us anyhow. 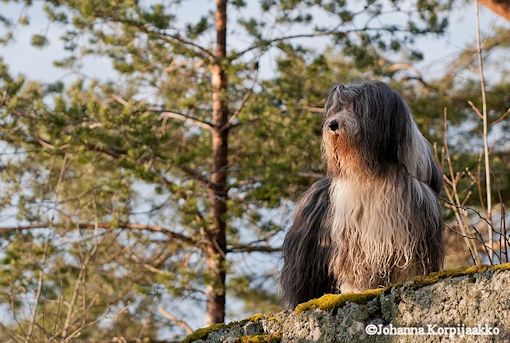 Last, but not least, I want to thank Each and Everyone in our Team, who has stood by us in thick and thin, LUV YA!